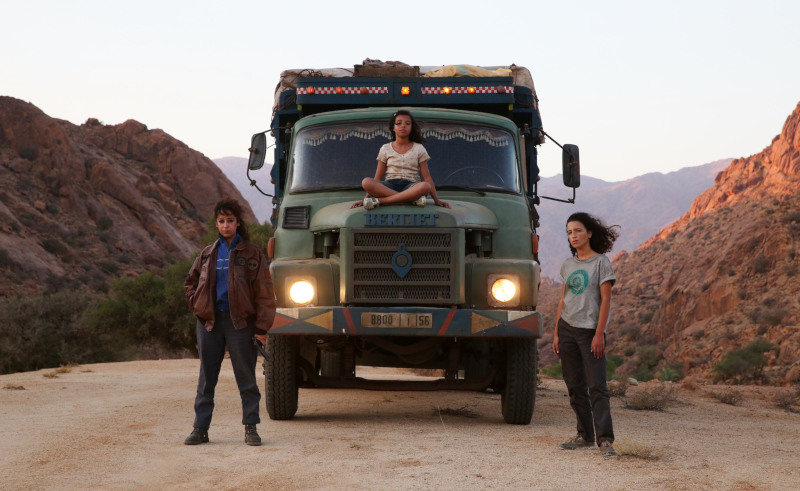 From August 31st to September 10th, the Venice International Film Festival played host to everything from celebrity drama (is Chris Pines okay? Everyone has been asking about him) to deep and involved workshops and talks about the movie industry. We’ve compiled a list of Arab films that stepped foot onto Venice’s glamorous red carpet…

‘My Girlfriend’ - directed by Egyptian filmmaker Kawthar Younis and starring Marc Haggar, Elham Safieddine, Fadel El Garhy, and Sonia Farid - is the first Egyptian film to compete under the ‘Orizzonti Cortometraggi Concorso’(Italian for ‘Horizons Short Film Competition’), an international contest that highlights films representing the latest aesthetic trends. The plot revolves around a romantic relationship exploring the complexity and effect of gender roles within intimate dynamics.

Winner of the Audience Award at Venice Film Festival’s Orizzonti Extra Section, Syrian film ‘Nezouh’ stars Kinda Alloush and Samer Al Masri, and is directed by Syrian filmmaker Soudade Kaadan. The film tackles familial dynamics within war-town Syria, where the choice between fleeing or clinging to remnants of a home becomes inevitable.

Set in a village on the coast of Egypt’s Nile river, ‘Land of Women’ is a hybrid documentary directed by Nada Riad that follows seven rebellious teenage girls as they form a street theatre troupe. Still a work in progress, the film was selected for the festival’s Final Cut workshop, which is dedicated to financing films in Africa and the Arab world.

Directed by Palestinian filmmaker Kamal Al-Jaafari, ‘A Fidai Film’ was selected in the Final Cut workshop. The film revolves around the historical looting of a Palestinian research center in Beirut in 1982, which resulted in a loss of archives, images, films, and documents. The film revolves around the notion of the loss of memory amidst occupation.

Directed by Lebanese filmmaker Myriam Al-Hajj, this Lebanese documentary won two awards at the Final Cut workshop. The film - which is still in production - follows the journeys of Lebanese activists Joumana Haddad and Perla-Joe Maalouli in 2018 till the Beirut explosion in 2022.

‘Black Light’ - directed by Algerian filmmaker Karim Ben Salah - won a €15,000 award in the Final Cut workshop. The film’s plot follows an Algerian student living in France as he is faced with the threat of deportation.

Directed by Jordanian filmmaker Amjad Al-Rasheed, ‘Inshallah A Boy’ participated and won a €5,000 prize during the Final Cut workshop. The work in progress tells the story of Nawal, a woman grieving her husband’s death, who discovers that she might be losing her home due to inheritance law complications.

Set in post-war Baghdad, ‘Hanging Gardens’ follows two brothers orphaned by the conflict, who find themselves surviving poverty by picking garbage. The film is directed by Iraqi filmmaker Ahmed Yassin Al Daradjii and co-produced by Egyptian producer Mohamed Hefzy amongst others, and was part of the Orizzonti Extra Competition.

‘For My Country’ by Algerian filmmaker Rachid Hami was selected in the festival’s Orizzonti competition. The film revolves around a young police officer of Algerian origin who’s murdered in an initiation ritual for the Saint-Cyr French military school.

‘Queens’ was the closing film for the festival’s Critics Week. Directed by Moroccan filmmaker Yasmine Benkiran, the film tells the story of a trio of women fleeing from police forces and embarking on a journey, where they explore freedom and encounter the patriarchy in Morocco.

‘Five Seasons of the Revolution’ - a work-in-progress - follows Lina, a woman passionate about documenting her personal life, until conflict in Syria breaks out, leading her to document its upheaval instead. Directed by a Syrian filmmaker known only as Lina, the film was selected at the Venice Gap-Financing Market, a fund for promising in-development projects worldwide.

Directed by Egyptian-Austrian filmmaker Abu Bakr Shawky - known for the award-winning film ‘Yomeddine’ - ‘The 67th Summer’ was amongst the films selected at the Venice Gap-Financing Market.

‘Fatna, A Woman Called Rachid’ by Moroccan filmmaker Helene Harder is a documentary about a former Moroccan political prisoner in the 1970s as she is freed from incarceration and explores the shifts in Moroccan society around.