A Godfather-like figure for the new generation of musicians, managing editor Dalia Awad speaks to Mahmoud Refaat about his role in advent of Avant Garde music and what he has up his sleeve for D-CAF's music programme, kicking off tomorrow... 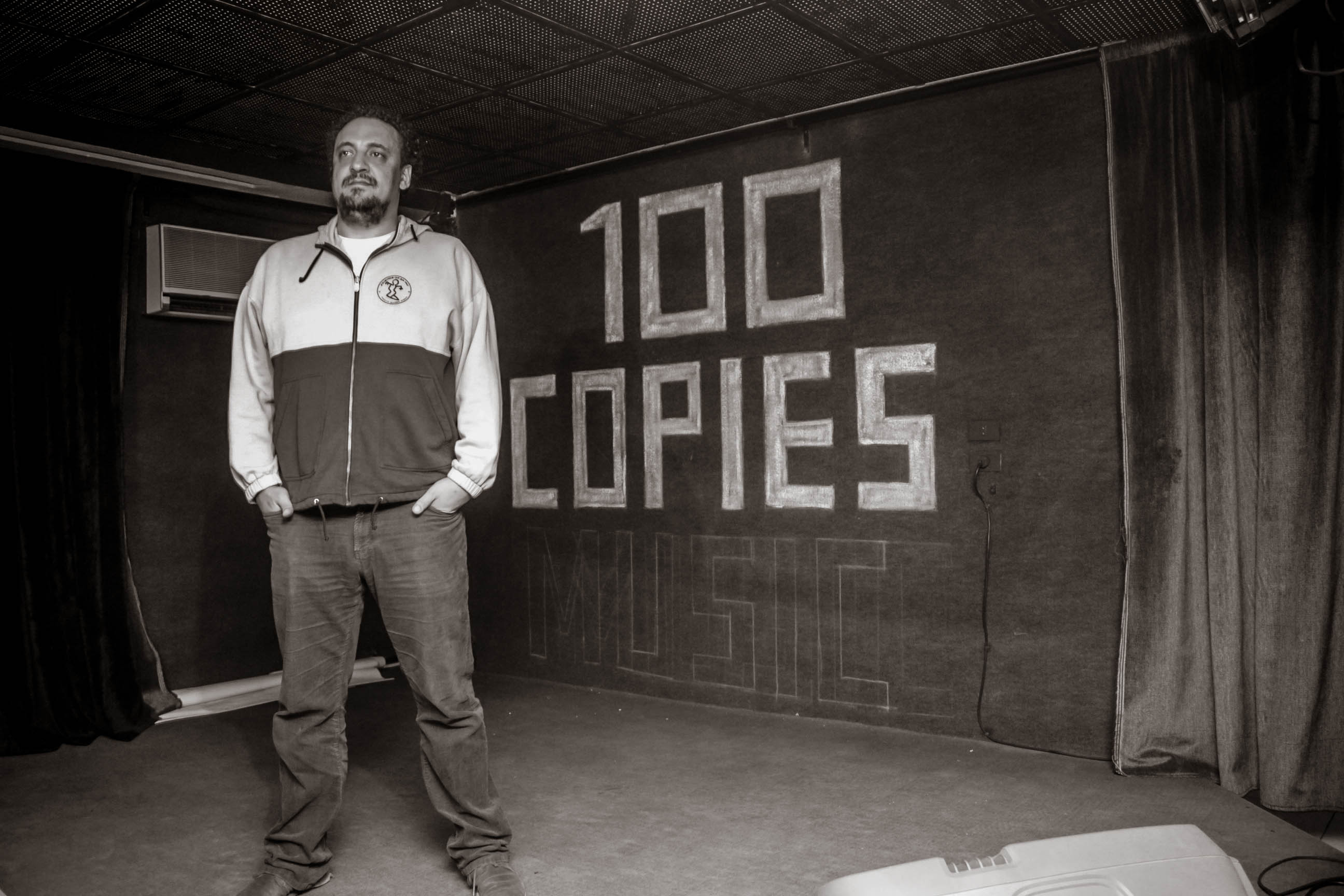 I’ll be honest – interviewing Mahmoud Refaat, once again taking his position as the music curator of D-CAF, was one of the more intimidating meetings of my career. This is the guy who’s been steadily putting fuel on the fire of Egypt’s underground music scene; a man who’s played his own music – ranging from Heavy Metal to avant-garde Electro – to hundreds of thousands across the world; the benchmark for success for the country’s modern musicians and, most importantly, a Godfather-like figure for the new generation, spotting talent, taking it under his wing and nurturing it until it takes flight. Entering the 100Copies Studio – launched in 2006, when Refaat decided his work with new, experimental artists should be formalised – I was expecting to feel like a fish out of water. Experimental is a word I haven’t used since GCSE Chemistry and my tastes in music are about as mainstream as it gets. The studio itself looks exactly like you’d imagine it; a cool-kids’ haven with gig posters strewn on the black walls, a few quirky types working away in the corners, fiddling with knobs and releasing little snippets of their sounds into the still air. Feeling completely out of place and, for lack of a better phrase, decidedly uncool, I start by asking Refaat the most basic of questions – “What was the first record that made you feel music was for you?” – with my pen poised to write down obscure artist names and genres I didn’t know existed. “It was Michael Jackson. Thriller,” he replies. “Me too!” I say, almost too relieved, as Refaat lights a cigarette, recalling the days of tape recorders, Moonwalking, and saving up all month for a new album.

While the King of Pop eased me into Refaat’s world, it quickly becomes clear that his musical direction, while influenced by the chart topping trends imported from the West, was and continues to be constantly evolving. “When I was 17, I went to stay with my uncle – who’s a painter and was branching into Jazz music at the time – in Switzerland. He had all these instrument and I found myself attracted to the drums. That’s when I first started making music. Freestyle at first, and quite influenced by Rock music,” he recalls. Returning from his summer in Europe, Refaat was on the hunt for musicians to form a band – “Heavy Metal was the SHIT back then!” – playing his first gig with the very same uncle, at the opening night of one of his exhibitions. Soon he joined arguably Cairo’s biggest Heavy Metal band of the time, The Cartoon Killers, still on drums but looking to inject a little something into the genre which had taken the city by storm. “We started to experiment with guitar effects, over-dubbing, reverb and shit like that and it became very interesting, especially with the drug culture of the time. Everyone was on drugs, and every kind of drug too,” he explains frankly of his entry into avant-garde, experimental sounds. “The two worlds – drugs and music, music and drugs – were completely linked; they went hand-in-hand, and most people considered it reaching a higher level of understanding,” he adds before mentioning that he sometimes dusts off his recordings from that time and wonders what in the hell they were thinking.

As Heavy Metal, its makers and its listeners, began gravitating towards the more psychedelic, alternative and abstract side of Rock, Refaat and his contemporaries eventually left the instruments behind altogether, and gave birth to the Electronic music scene he would later mandate himself to push forward. “There was also the DJ scene, and Friday nights at Jackie’s  and all that, but this wasn’t Electronic music. They weren’t making music, they were just making playlists.” The shift came in the mid-to-late 90s, explains Refaat, as the angst of Egypt’s youth came to a head, seeing an explosion in the use of Experimental as a prefix for just about anything. “Experimental art, Experimental theatre, Experimental dance... Rules were abandoned, it’s as if suddenly we realised we didn’t have to do things as they were usually done!” he laughs as he recalls his first professional Electronic productions. Computers, multitracks, bells and drum machines made up Refaat’s army as he teamed up with choreographers to provide the live score for a Experimental (obviously) performance. “That’s the first time my kind of music was exposed to an audience,” he recalls, and his kind of music – his unique, undecipherable yet powerful compositions – has stayed one beat ahead ever since.

“Now, people are more open to new things because of the access we have to music from all over the world,” says Refaat of the explosion of Electronic music and new wave forms that have dominated the scene since the early 2000s. “Electronic music is integrated into pretty much every art these days, even in commercial films and advertisement.”  While Refaat grew up on Rock, Metal and Michael Jackson, he never found himself particularly inspired or shaped by any of the Western artists making Electronic music at the time which, in fact, seems to have been a blessing in disguise. Working with scores of young artists, hoping to follow his very own footsteps, Refaat admits that even when there is unique talent, he can tell which musicians have inspired the ones he works with. Instead of this imitation, however sincere it is in its flattery of the original artist, Refaat found himself carving his own path, following his gut to turn knobs, bash at drum machines and take field recordings of whatever sounds pricked his ears. “The last thing I recorded – I know it sounds really cheesy – was when I was on a felucca on the Nile. The sound of the water lapping against the boat, against some fuzzy, far-away Shaabi music. It was really interesting.”

Refaat’s one-of-a-kind sound stays true to his almost-accidental entry into the Electronic scene, as he usually prefers to use the retro equipment he came to know and love through experimentation, and he has since released a slew of records, most notable of which was Miramar which hit the scene under the 100Copies label which he launched in 2006. The name of the record label comes from the fact that they only produce one hundred CDs of each release, keeping quantity limited and interest high, and, at the end of the day, making sure the underground scene is exactly that – underground. “While I wish success for everyone I work with, there’s always a need for underground music. It’s not just commercial records that are necessary for the music industry’s eco-system,” Refaat explains. Having gigged around the world, most notably in Switzerland (where he had an artist residency) and Germany, Refaat settled back in Cairo to give young Egyptians a space in which they feel safe enough to let everything go in order to create. “There was no platform for alternative musicians, nothing regular to bring them together to inspire and encourage them,” he recalls, admitting that despite the best efforts of the label and initiatives like D-CAF, the scene still isn’t where it needs to be. “So it felt natural to do this myself. It was as simple as that. Only around 30 people were at my first release and that was a success at the time!”

Just a few weeks later, Refaat was inundated with musician and artist requests to work with him, and between 2006 and the 2011 revolution, 100Copies had released over 10 records, having worked with scores of artists. In 2011, the label – which had previously been run from Refaat’s home studio, as well as renting space at other local studios – found a home in downtown Cairo. Since then, every Friday, 100Copies has held an intimate gig for experimental and alternative artists, incubated in the bustling studio/performance space under Refaat’s guidance. All the concerts are free to attend, and the artists, though not paid for the performance, are offered invaluable studio hours where they are free to use the high-tech, professional equipment 100Copies has on offer. Though 100Copies remains firmly in Experimental scene, Refaat has long championed the Shaabi cause, and has close working relationships with some of the biggest names in the ever-growing genre. So it’s no surprise he laments the commercialisation of the truly modern Egyptian musical style. “The kids are now singing for Sobky [Films]. Fucking Sobky!” he yells, only half joking about the state of Egypt’s arts and the appropriation of real, raw street culture by sensationalised commercial film factories, soda brands and the like. “We accept the commercial scene, but the commercial scene doesn’t accept what we’re doing here, on the underground. They want to snatch up these artists and mould them into what sells the most drinks and cinema tickets. And that’s very dangerous. It establishes these guidelines of what can make it and what can’t and that stifles and frustrates everyone.”

It is this exact frustration, formed from the black hole that seems to exist between the underground and commercial scenes, however, that led to the advent of D-CAF, kicking off its third season this week, taking over downtown Cairo with music, song, dance, theatre and just about every art form for three weeks. “We need to fix this structure thing, internally. That’s my aim. D-CAF shows people that it’s possible to have something new to see or hear every night. It shows that with some planning and support, there are venues and opportunities,” explains Refaat and, given his experience, you’d be hard pressed to find anyone else more suited to curate the music programme. Pairing the brightest up-and-coming local artists including Ismael, Fayrouz Karawya, Islam Chipsy, Figo, Sadat and El Manzouma, with brilliant underground international acts from Europe, the Americas and the Middle East, Refaat’s expert ear has helped create an explosive line up. “For D-CAF especially, I never want to bring in the usual suspects. That’s boring; D-CAF isn’t. A successful festival is one when the audience sees and hears something they’ve never experienced before.” And Refaat is certainly an expert in that.

Photographs of Mahmoud Refaat by Mohamed Magdy. Photo of 100Copies performance by CairoZoom.