CairoScene's intrepid reporter Eihab Boraie goes where few have dared to go - in the midst of the pro-Morsi supports, outside of the University of Cairo, to find out what they're really thinking. 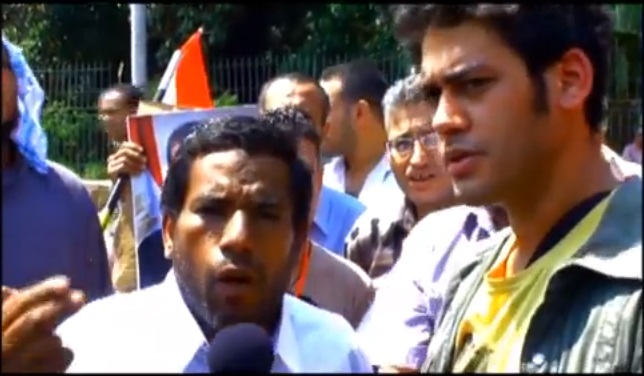 “Do you see the story? Do you see anything? It seems to me I am trying to tell you a dream - making a vain attempt, because no relation of a dream can convey the dream-sensation, that commingling of absurdity, surprise, and bewilderment in a tremor of struggling revolt, that notion of being captured by the incredible which is the very essence of dreams...They had behind them, to my mind, the terrific suggestiveness of words heard in dreams, of phrases spoken in nightmares.” Joseph Conrad, Heart of Darkness.

July 2nd, 2013: On the third day of the Tamarod movement, I awake to a phone call asking me to come into the office and continue researching the latest information to be updated on CairoScene. Feeling conflicted about leaving my place in the streets, I keep reminding myself that we have thousands of followers looking for updates on what is officially happening. As the day wore on I knew there was more I could be doing. I started looking for videos of Pro-Morsi supporters expressing their thoughts on the crisis. Unfortunately, I couldn't find any, and I started to think about how scary it must be for reporters to approach angry, bearded men. The more I thought about it the more I felt it a duty to confront my fears and perhaps recklessly offer my life for the opportunity to prove that we here at CairoScene albeit biased, will try somewhat to seem unbiased for at least 10 minutes of interviews.

I decided if I was going to do this that I needed to be prepared. I asked the office to lend me a translator in case my broken Arabic sounded offensive, but secretly in the back of my mind I was looking for someone I could outrun. Enter Amjad, a 20 year-old naive translator with smaller calf muscles than myself. I asked him to come with me and be my camera man/saviour if things got ugly. It was now time to return to the source of many of my medical school nightmares; The University of Cairo, notoriously known as a gathering spot for angry Islamists.

As we walked up to the gates, I noticed that the closer we got, the longer the beards became. Prayer marks became larger and larger and the only women that could be seen were niqabi ninjas hiding in the shadows. As I got to the gate, I could feel piercing eyes from all directions critiquing my shorts and my playful Gregory Pepper shirt. It was in that moment I decided to lay all my cards on the table. I explained to the guards that I was here simply to get some photos and statements from Pro-Morsi supporters because I thought the media was painting a picture of them as terrorists. I confidently proclaimed, in Arabic, that I don't see terrorists; I only see Egyptians. With that statement they decided to search me and allowed me to enter.

Walking around with all eyes on me, I approached a man with what seemed to be just a bit of stubble. I figured the more facial hair, the more radical. My goal was not to ask questions that would anger anyone, but to just give them a chance to speak their minds. Within minutes of getting my first interview, a crowd formed around me, all looking for a chance to talk. Speaking over each other, reaching for my microphone, as if I was in the desert with the only source of water. I quickly realised that I wouldn't need to search for interviews. They would all come to me. Highlights from my interviews is the guy wearing the marijuana t-shirt, which quickly gets covered by a poster of Morsi's face, claiming that he was there to uphold the ideals of democracy. Then there is the guy who keeps pointing at me with his Spongebob Squarepants notebook and yelling about legitimacy. An older man with by far the longest beard in the bunch, claims that if Morsi is forced out, this country will turn into Syria, and so on. At one point I ask if we could all agree that we don't want to see blood on the streets, but the response was minimal with only a few agreeing. At about the 25-minute point, I try to wrap things up, as a tug of war breaks out for who will make the last statement. One man grabs the microphone in a bid to comfort Morsi. “Behind you are men who love death as much as they love life,” he says.

I seemed to earn the respect of the old bearded man when I mentioned Sayyid Qutb's, one of the founders of the Muslim Brotherhood, ideology. I noticed him following us around telling onlookers that we were OK and that we were trying to help. I was trying to get pictures of the rally, attended by hundreds, looking for a higher vantage point to take a picture. A man suggested I get on the bus and try to take a picture from on top. Thinking it was a great idea I stepped onto the bus, and was instantly uncomfortable as the only people on the bus were niqabi women, sitting in silence as if they were possessions and not people. The only sign of humanity was the widening of their eyes in unison when I stepped on. I asked if anyone would like to do an interview, but was met with an uncomfortable silence making me feel like I was talking to shadows. After getting a few pictures, I decided to head back to the office to start editing the footage.

Hours after leaving, reports were coming in of gun battles erupting where I just was. In fact, on the other side of the building in which the CairoScene offices are located, a stray bullet found its way through a window on the twelfth floor. By the end of day, 22 were pronounced dead and hundreds injured. I couldn't help feel that I was super lucky as I must have been a very easy target to hit. I wondered if the people I interviewed were involved. I wondered if I would have been a victim had I not struck a chord with the bearded man over Sayyid Qutb. The only thing I knew for sure is that I would not be attending any more Pro-Morsi rallies.

“But his soul was mad. Being alone in the wilderness, it had looked within itself and, by heavens I tell you, it had gone mad.” - Joseph Conrad, Heart of Darkness.