The Sukari Affair: How Centamin Used a Treasure Map to Rob Egypt of Its Gold

An ancient piece of papyrus created by our forefathers maps out 120 gold honeypots across Egypt, including what is now one of the world's biggest mines; so why aren't we benefiting? Eihab Boraie delves in. 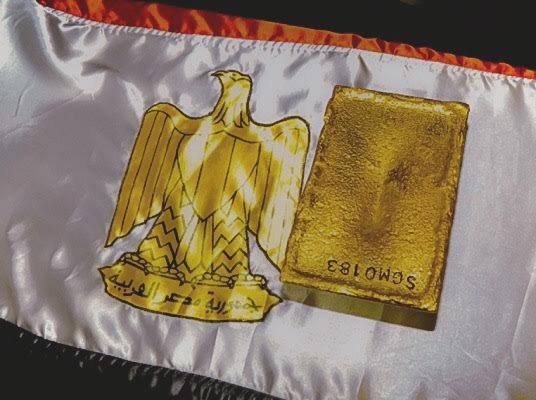 Anyone who visits the historic Cairo Museum will be taken back by the abundance of gold used in creating extravagant jewellery and tombs of Egypt’s ancients, that continues to adorn Egyptian women until this day. So much gold was unearthed in tombs that many believed that the ancients must have mined all the gold that was once available in Egypt. However, this belief is proving to be untrue as the Australian-based mining company Centamin partnered with the Egyptian government continues to surpass their expectations, yielding an increase of profit with every passing year thanks to an ancient papyrus treasure map found on display in an Italian museum.

Humanity's obsession with gold dates back to the pre-dynastic period (before 3100 BCE). During those ancient times, Egyptians believed that gold was the flesh of the sun god, Ra, and as such was considered a symbol of eternal life. The shiny malleable metal was moulded into variety of jewellery destined to be buried alongside deceased royalty hoping to look their best for the afterlife. Fast forward to modern day, and gold has survived with its value increased drastically over the last decade as its demand extends beyond jewellery and into variety of technologies including; creating microchips, coating astronaut visors from harmful ultra violet rays, and even being ingested as a topping on high end desserts by rich, fat tycoons looking to make their shit shinier.

Despite knowledge of our gold loving past and all these proud examples of human advancements in golden technology, the mining industry in Egypt is almost non-existent, as the ‘know-how’ seemed to have vanished Egypt around 1958. According to former Minister of Oil, Sameh Fahmi, “From 1902 to 1958 only 7 tons of gold were yielded. In 1958 our production of gold was only 56 kilos and their price were 22 thousand pounds,” he tells Hatem Masheer in a 2010 TV interview.

Over 30 years would pass with Egyptian giving little to no interest in mining. That all changed in 1994, when researchers uncovered that The Turin Papyrus Map hanging in Museo Egizio was not only the oldest surviving geographical and topographical map, but was actually a treasure map created for Ramses IV, marking 120 gold mines. Instead of calling for the nation to encourage its youth to become experts in the latest techniques of mining this country's historically precious and extremely valuable resource, the Mubarak government decided to negotiate with a foreign company for 15 years over exploring the largest mine on the map; the Sukari Gold Mine. “The disagreement we mentioned earlier was mainly about the area. They required a certain area about 5000km2 to prospect for gold. The Egyptian authority assigned to handle this project wanted to grant them an area of 3 km2 only,” explains the former minister.

After years of arbitration, a final deal was reached to allow for the exploration of 160km2 of the Sukari gold mine. Forming a partnership with the Egyptian Mineral Resources Authority, Centamin’s subsidiary in Egypt, Pharaohs Gold Mine, agreed to pay the government a 3 percent royalty fee from gold sales, and after Centamin’s recover the operation/exploration costs would then split the profits 50/50.

The commercial operation officially began in 2010, however, the gold produced was a mixture of around 93% gold and 7% silver, which would then be sent to foreign refineries to be separated and purified before being sold. With each passing year, the Sukari mine surpassed everyone’s expectation as it proved to have more gold then originally thought. The pharaohs only had the capabilities of mining to a depth of 30m, but with the advancement of equipment companies are now able to mine up to 800m below ground level, and in this case Centamin discovered that there were over 20 billion dollars worth of gold to unearth. Considered a massive success, the Australian-based Centamin began rolling in profits only to run into obstacles in the aftermath of the January 25th uprising. In 2012, the Muslim Brotherhood-led government attempted to invalidate the contract signed. At the time, Centamin’s future seemed uncertain, until 2014 when a new investment law was passed banning third parties from challenging contracts made by the government and investors. Mining resumed, however the disputes continued as the Egyptian government believed they were being short-changed. In four years of commercially producing and selling gold, the Egyptian government only received royalty fees (around $42 million), as well as $17 million profit share which they believe fall short of the promises, claiming that Centamin may being inflated the cost of operations. Centamin insists that the profit share of the Sukari Mine isn’t due to the government until 2015. On Sunday, it was announced that the Sukari Gold Mine produced 206KG which it sold to Canada for refining and selling to the world stock markets. What is left unknown is how much the gold was sold for and whether Egypt would begin equally sharing the profits.

It wouldn’t come as much of surprise if this deal ends in yet another dispute with the government, which brings up the important question of why Egypt continues to allow and rely on foreign companies to extract the nation's resources for a fraction of the profits. Often the excuse used by officials is that Egypt doesn’t have the know how to build the factory needed or the training to work the machinery to reach the depths required. With millions unemployed Egypt should consider mining their own gold and calling out to the nation to help, the same way they did to build the New Suez Canal. The youth want jobs and before heading to university the government should list the skill set or expertise needed by the state to ensure employment after finishing University and ultimately bettering the nation by reducing reliance on foreign experts. Some may argue that the price of gold fluctuates too much to be a secure bet. However, in the last decade the prices have sky rocketed making it extremely valuable on today’s market; any fluctuations can be compared to oil prices except that it is a lot easier and more profitable to drill for. Simply put, Egypt’s reserves continue to grow the more it explores, at the same time the price for gold is currently high, and shipping costs and times are drastically reduced as gold can be shipped by air instead of sea.

As it stands the Sukari Gold Mine is expected to generate over $20 billion dollars of profit over 20 years and is the only factory equipped mine producing gold in the country. Egypt will see less than half the profits, which is shameful considering our ancestors gifted us with an accurate treasure map to the nation’s riches. If the pharaohs were able to do it on a large scale with basic tools, why doesn’t Egypt believe it can do it today with modern machinery? The map discloses 120 locations and the government assessed that there is an additional 40 mines to be explored. It isn’t as though Egypt would have to search for where the gold is buried in an endless desert, they already know, and if they became experts in the field could build their own purifying refinery being the only country in Africa to have one. This would make it ideal and cheaper for South Africa to purify its gold, which accounts for over half the world’s gold production, ultimately creating Egyptian jobs and massively boosting the economy. There seem to be endless benefits to making this a national priority and hopefully Egypt will wake up to this realisation before the nation is plundered of all its gold by foreign interest.