The temple was dedicated to Zeus, the ancient Greek god of thunder and ruler of Mount Olympus, and was named after Mount Kasios in Syria, where Zeus was once worshipped. 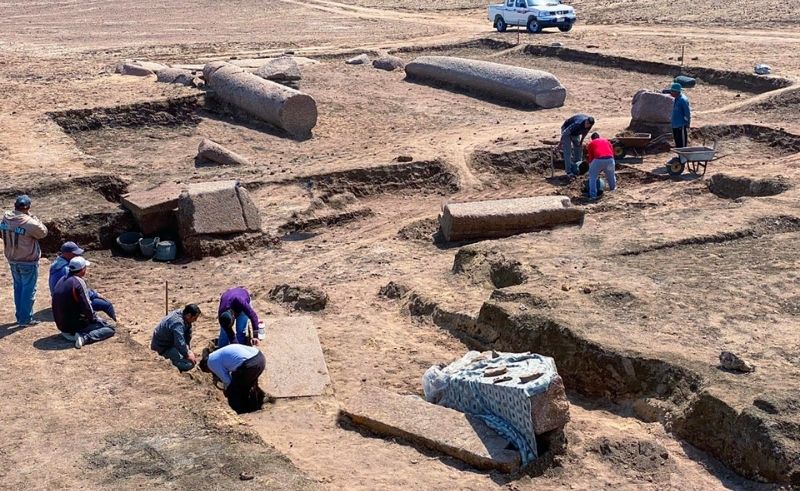 The remains of the ancient temple of Zeus-Kasios were discovered in North Sinai, at the Tell-el Farma archaeological site. The temple was dedicated to Zeus, the ancient Greek god of thunder and ruler of Mount Olympus, and was named after Mount Kasios in Syria, where Zeus was once worshipped.

Tell-el Farma (known as ‘Pelusium’ in ancient times) dates back to the late pharaonic period, with evidence of inhabitants going as far as Byzantine and Greco-Roman times, as well as the Christian and Islamic periods.

Archeologists were able to identify the temple based on remnants of a massive gate that were scattered around the discovery site. The gate was composed of two large pink granite pillars, each around eight metres in height and one metre in width. The archeologists speculate that the gate was destroyed due to a powerful earthquake.

Hints of the existence of this temple goes back to 1910, when French archeologist Jean Clédat found pillars with Greek engraving detailing the presence of the Zeus temple nearby, which he was never able to find in his lifetime. Other similar pillars were discovered earlier this year, leading modern archaeologists to conclude that this must be the Zeus-Kasios temple.

The temple was built using mudbrick, with a raised platform made of rubble and broken stones, and pillars made of pink granite. Broken pieces of pink-granite pillars were scattered nearby. Some of those granite pieces were used to build the memorial church on site, as well as other buildings in the area.

To get to the temple, the worshippers would have had to take a large pink granite staircase to get to the entrance on the east side of the temple.

The discovered pieces of the temple will be put together using photogrammetry, which will lead to a realistic recreation of what the temple used to look like.