Bust a Capoeira in Yo Ass

Timmy Mowafi delves into the world of the Brazilian art-cum-sport, as the rituals and rhythms reveal to him a unique physical and spiritual retreat, right here in Cairo. He catches up with Professor Passoka to learn more... 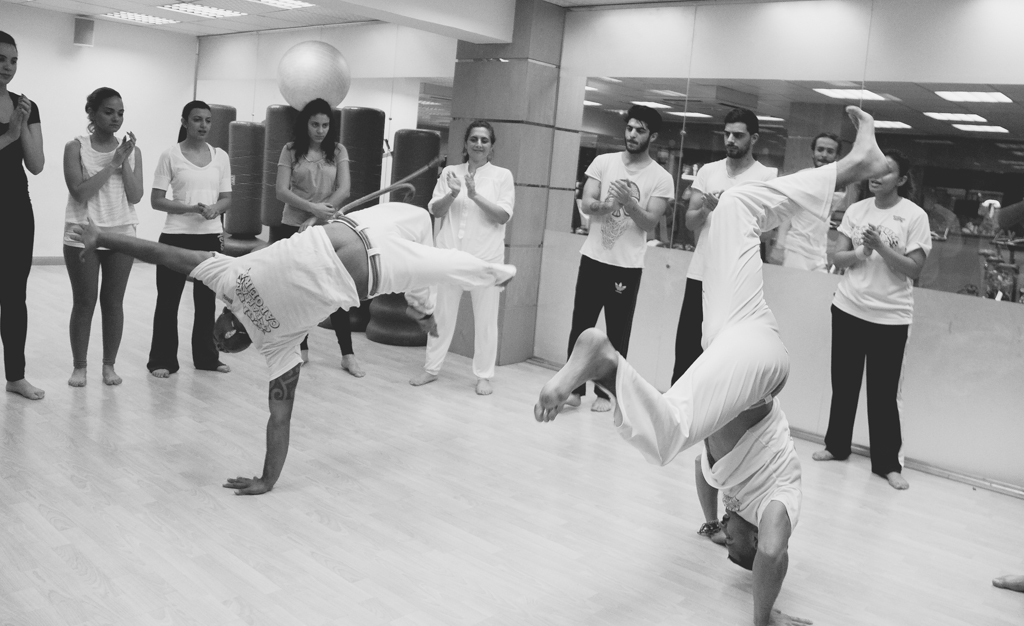 Capoeira is the Brazilian martial art that lays smack bang in the middle of a sport-art-game Venn diagram and seemed right up my alley, having been told that I dance like a douchebag and fight like a ballerina. Hoping this would add some grace and steel to both respectively, I headed over to Olorum Bahia Capoeira Egypt for an introduction.

“It’s addictive, that positive energy… the singing… the dancing,” I hear from May Sadek who has been going to Capoeira for three months, as I enter the hall, just one of many familiar faces; a lot of whom I used to see out. I was wandering where these people were going, turns out this is where the party's at. Excited to get into the thick of all this dancing and singing business, I had a chat with Joey Altmann whilst he was warming up, a four year Capoeirista who donned a green cord around his waist; the equivalent of a ranking system like in other martial arts. “If you’re going to Capoeira you don’t have to go to the gym; it tenses, stretches and works out every single muscle in your body,” he tells me mid-quad stretch. Wait, what? I’m actually going to have to work hard? I thought it was all jumping about and banging a pandeiro! Before I had a chance to reflect on the relationship between the morning’s hangover and the imminent exercise, Professor Passoka, the stocky founder of Olorum Bahia and master Capoeirista, appeared and had us warming up, running in figure of eights and doing press ups and sit ups to the tune of what sounded like high-octane tribal Samba music.

The first thing you notice is this tremendous vibration of togetherness the trainers attempt to exude with each little exercise, and despite my aching muscles, along with the music, it didn’t feel like training; it was actually fun. After the warm up, the beginners were taken through the basic moves of Capoeira from the rocking back and forth of the ginga to the armada front-kick and defensive moves like the cart-wheel-like aú which finally had me feeling a bit like the monkey man from one of my favorite martial arts films, Bloodsport.

Towards the end of the session, all the Capoeiristas formed a circle, someone started playing the Berimbau - a single-string percussion instrument - another started banging away on the Atabaque, the music reverberated infectiously around the hall and everyone started clapping their hands to the rhythm whilst chanting traditional Portuguese songs. This was a Roda. Two Capoeiristas enter the circle at a time facing off. It was the first time the beginners got a chance to see some real Capoeira going on as they flipped, kicked, swerved and meandered around each other. I was mesmerised by the stunning blur of acrobatics and visceral movements, fitting through the air around each like a sort of sacred Tetris game, only interrupted by my brother whispering in my ear: “What is this pussy shit? When do they hit each other...”

Capoeira can be a contact sport during aggressive competition scenarios; the moves are design to inflict pain but mostly it’s a sort of combat simulation. When the two in the middle came dangerously close to those outside the circle we were told not to step back but put our arms in as “to not break the energy.” This sense of togetherness is solidified at the end of the session as the circle closes in to the front, the tribal Samba and the chanting gets louder and everyone just sort of starts… raving! I imagine if all the Tekken characters were off duty and decided to have a shindig, it would be something like this. “3ayez tetkhebet?” my brother whispers in my ear, once again ruining an otherwise surreal and beautiful moment.

Out of context though, this togetherness, this fighting without actually fighting, the chanting… it all sounds a bit weird right? A bit cult-like, but it's all part of a fascinatingly rich tapestry of history that has led Capoeira from Angolan slaves in Brazil to the Yamama Center in Zamalek.

After the session, as the hard-hitting vocal House bled into the hall from the adjacent gym, blanketing what remained of the holistic energy from the Roda, I sat down with Professor Passoka to find out more. Although that’s not his real name, as he jokes; he doesn’t even remember his real name. The concept of the master Capoeirista giving their trainee a nickname or an Apelido was created back when Capoeira practice was considered a crime. So if a Capoeirista was captured by the police, he would be unable to identify his fellow Capoeiristas, even when tortured. As Passoka told me, Capoeira arose in the 16th century as a mean for slaves to practice fighting techniques used to escape, without raising suspicion, under the guise of dancing, so the colonial agents would be none the wiser, hence the eventual criminalisation before Mestre Pastinha, in the mid 1900s, was said to have founded modern day Capoeira and the sport spread internationally.

Passoka started off as a dancer and then fell into Capoeira back in his hometown of Bahia in Brazil over 20 years ago before touring the world doing African-Brazilian dance. He arrived in Egypt in 2011 after being invited by one of his former Capoeira students (a Frenchman who was giving classes here in Cairo) for his Batizado (graduation ceremony in Capoeira). He loved Egypt as it reminded it of home and took his former student's place teaching the course. “More than 150 students have passed through the course since, and I’m doing everything I can to develop the sport here.”

I asked him if he thinks Capoeira is more of a sport or an art “the acrobats, the flying in the air, the music… all this is artistic but of course, a lot of athleticism is involved. When you do Capoeira, even walking becomes an art,” he replies, with a huge amount of passion. “Capoeira is my life,” he boasts with hand on heart.

As for the musical side of things; “it gives rhythm and meaning to Capoeira, the instruments dictate the Roda and the Capoeirista, and gives it energy. It gives me goosebumps to talk about the Berimbau.” Much like many other martial arts, the movements represent something bigger, something more than just the person doing it. It's something pretty spiritual. “The movements started with the slaves of African descendants copying the same movements of the animals around them, and the moves are often named after animals for this reason.” He continued: “the spiritual part of true Capoeiristas, is that when they enter the Roda they put a mask on. Everyone has a fake name, and so you adapt to this personality and when you go in, everyone does his prayer and asks for the protection of God and they call upon the Gods of their descendants in Africa to give them power to enjoy whatever happens and the creativity to go from one movement to the other.”

Whilst everything I was learning made sense, it still struck me as such a contradictory sport; you’re talking about rebellion and animalistic tendencies and then you’re talking about energy and simulated combat. But in that I feel that’s where the brilliance of Capoeira lies, it’s blending of tradition with a modern adaptation is the epitome of balance. Balance is demanded from the sport both on a physical and metaphysical plain.

“No one loses in Capoeira, you are always winning something,” Passoka tells me. “The spirit of Capoeira is not to compete with others, but to compete with yourself… and to have a good time.”

The Brazilian myagi has spoken.

Special thanks to Olorum Bahia trainer Isso for translating and teaching me how to do a kick-ass ginga.

For more information on Olorum Bahia Capoeira Egypt and their session schedules check out their Facebook here.

They will also be hosting a massive roadshow event in collaboration with other Capoeira groups in Egypt this Saturday 8th of March at the Aquarium Grotto in Zamalek. So if you’re looking to get into the sport that’s a great place to start! Check out all the event details here.