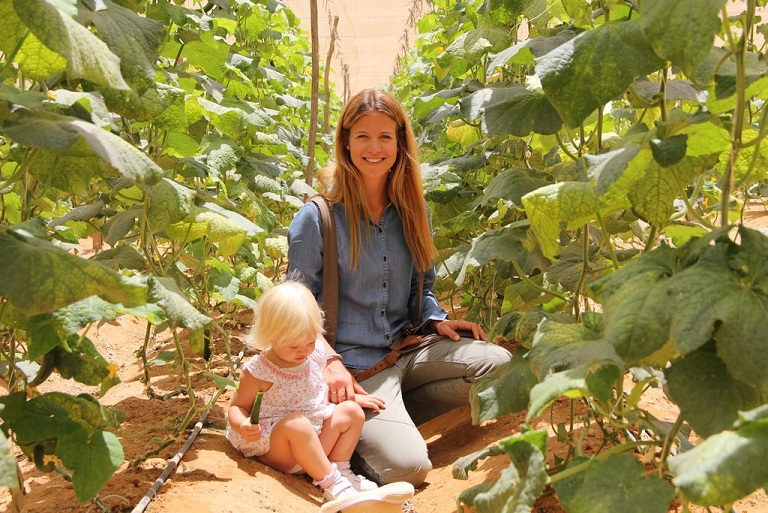 “Look there's a butterfly, that's a good sign,” Sara K.H. Nour points out to me as we wander through endless rows of various forms of vegetation sprouting from the ground in parallel leafy arrangements. “Ladybirds too…any insects really, are a positive indication.” Exploring Desert Lake Farms, the source of Nour’s Organic Food, is something akin to having stumbled upon another universe; one in which you can literally stroll underneath a canopy of grapes and casually pluck one right off the tree and eat it. Slightly surreal.

The farm was founded, in its current incarnation, four years ago when Swiss-born Nour, a long term advocate of healthy living, moved to Egypt with her husband and decided to cultivate the unused acres of land. “Basically this land was in my husband’s family for a really long time, around 20 years, and no one in the family was really interested to pursue this as a venture,” Nour explains. “And then I saw the land and I was in awe. It was so big and there was so much potential and I’ve always believed in organic food and natural farming so we decided to make it a project. So slowly but surely we started converting the land to an organic farm.” With a rudimentary grasp of farming, Nour delved into the field to acquire knowledge about building an organic farm from the ground up. “I was brought up in Switzerland and we had a big garden and my mum’s family is a farming family, so I did know a lot about growing food but not in a professional way,” Nour explains. She started taking courses on the subject and even began a Masters in Organic Agriculture at Cairo University – while pregnant no less – before the revolution and consequent unstable state of the nation caused her to pause it. The farm eventually flourished, moving from its starting point of only selling at Nun Center’s Farmer’s Market, to currently selling to a variety of select supermarkets including Gourmet Egypt, and delivering weekly baskets loaded with fresh produce directly to people’s homes – “it’s truly farm-to-table.”

Strolling through the farm, Nour is all earth mother, balancing her two-year-old, Lara on her hip and slicing vegetation off trees with one hand for us to try. The entrepreneurial ingénue and her child are in their element at the farm; since its inception, Nour comes every day, and has brought her daughter along since her birth. She is hands-on with the running of it, working in tandem with a team of engineers and receiving help in financial, business, and agricultural matters from her husband and close family friends, who often consult on the project. Though running an organic farm is not without its challenges, Nour saw a gap in a nascent market where she could pursue her passion project. “We are in such a unique position; there’s so much potential for growth here,” she says of Egypt's yet unsaturated organic market. “And we have sun 365 days a year; no one has that!” With the arid, often punishing conditions of the desert, one might imagine it wouldn’t be the ideal backdrop for farming. “‎Farming sustainably in the desert is challenging,” Nour admits. But the eternal sunshine is rare advantage, and moreover, the dry climate makes the crop less prone to pests, fungus, and disease. And organic farming grants favours that its counterpart does not. “Another important principle of organic farming is saving our seeds – we collect seeds from our successful crops, dry them and plant them next season. It's all about being a closed circle,” Nour explains. “Often, conventional farms use modified or chemically treated seeds that produce crops from which seeds cannot be harvested and used in the next cultivation.”

That is in addition to the obvious; the detrimental domino effects which play out as a corollary of the chemicals conventional farming utilises, essentially poisoning both the environment and people in the process.  “Conventional farms here use too many chemicals and pesticides. Chemicals will seep into the soil, they can give you cancer, it’s so destructive,” Nour emphasises. “Organic farming should be the standard, not the other way around. It’s the only sustainable way to make food.” As of late, she agrees to seeing a shift in the collective conscious of the country, where health is no longer something considered in hindsight. “I think there is a certain green wave happening now, where people want to know where their food comes from, they want to be healthy,” she elaborates. “People are more aware now; we know what happens to us when we eat fruits and vegetables that are contaminated and we know what happens to the environment and we are starting to see the effects of that.”

Despite a steady progression towards cleaner living apparent in both an awareness among the population coupled with the advent of what are now a number of organic farms in Egypt, Nour cites the government's lax attitude when it comes to agriculture as something which still holds the industry back. When it comes to farming, it’s a free for all, with little to no rules regulating chemical usage. “I'm hoping eventually there will be legislation, more rules with regards to chemicals in farming,” she says, “that’s also why you should know who grows your food and trust that person.”

Her staunch insistence on healthy living is what causes her to make the daily commute up to the farm, which lays a good half hour after the Cairo-Alexandria toll station. “For me, providing safe, clean food is a career where there’s a real purpose to it.” It is likewise important for her to immerse her daughter in an environment that draws on nature and not concrete. “It’s so important for her to be free and be in a natural environment,” Nour stresses. Her daughter is as at home on the farm as Nour, who checks in with the farmers and oversees every aspect of its running while Lara waddles casually through the soil aisles. It's almost absurdly picturesque. We stroll through fields lined with plants sprouting cucumbers and wander underneath a canopy of trees laden with the burden of fresh grapes where sunlight punctures through in rivulets creating a latticed pattern of light throughout the shade on the ground. “Having this environment available…it’s a blessing,” Nour says. In a city choking on chemicals, pollution, and saturated fats, the farm and its derivative crops are ‎a refreshing reprieve and Nour hopes that the lifestyle will extend to reach more and more people. “We have plans to expand – we haven’t even used all the land, but aside from increasing our production, we want to help people be more aware, know where they’re food comes from. We’d like to be a place where adults and children can learn about growing food and nature.” They plan on opening a visitors centre in 2016 and in the meantime, will continue to nourish an ever-burgeoning healthy organic mindset.

Orders can be placed anytime through their website www.desertlakefarms.com or by phone 01018944699 any time before 2 PM on Sunday, and before 2 PM on Tuesday.