We catch up with Egyptian cyclist Helmy ElSaeed as he completes his tour from the northernmost part of Europe, all the way down. 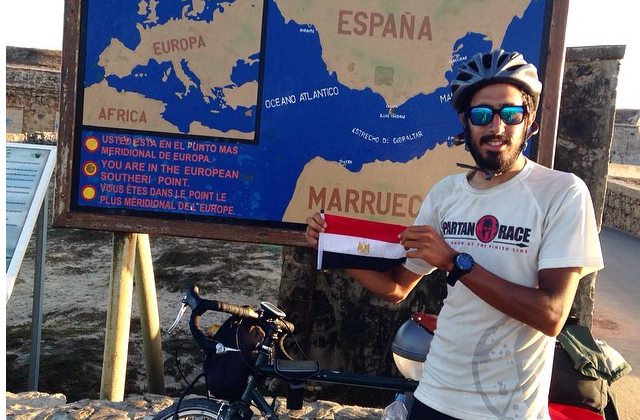 Speaking to us from the Casablanca, Morocco, young Helmy ElSaeed has just accomplished the cinematic feat of travelling from the northernmost part of Europe in Norway to its most southern part in Gibraltar, Spain... by bicycle. From feeding huskies for board to being caught in Arctic snow storms, he has covered 62 cities and nearly 7000KM in 70 days for a trip that wasn't dreamed of through any particular altruistic charitable cause but from a pure feeling of wanderlust which in itself is incredibly inspirational for a generation fueled by docility and celebrity. "It's simple, I just wanted to do it, and I just do what I want... thought into action... it's not my first rodeo by the way..." ElSaeed explained when we contacted him for a chat. In 2013 he cycled across the Northern part of Italy and in 2012 cross country skiied across the Finnmark plateu in the Arctic.

Attempting to catch him out by asking if he's trying to cycle away from something, he simply said "the impossible." And for most of us it's a task that does seem pretty impossible as far as planning, and mental toughness is concerned but the adventurer simply takes it in his stride; "at a basic level, the word or concept of something being too '3astafa' [a hassle] to do should not exist. Hassle should not be in your dictionary. Now apply this attitude to your physical and mental training as well as planning the logistics. Simpler is always better."

Explaining that his journeys have left him with more questions than answers about the world, he reflects on the importance of answering your own questions in life; "do what you want to do, but most important is that you actually do it." Well, here’s looking at you, kid. Check out more snaps from Helmy ElSaeeds journey on his Instagram here.