Health-conscious herbivore couple Alaa Sharshar and Yasmine Nazmy are introducing Cairo to its first vegan restaurant. We find out more about their choice to say no to animal products and what we can expect at The Vegan Kitchen. 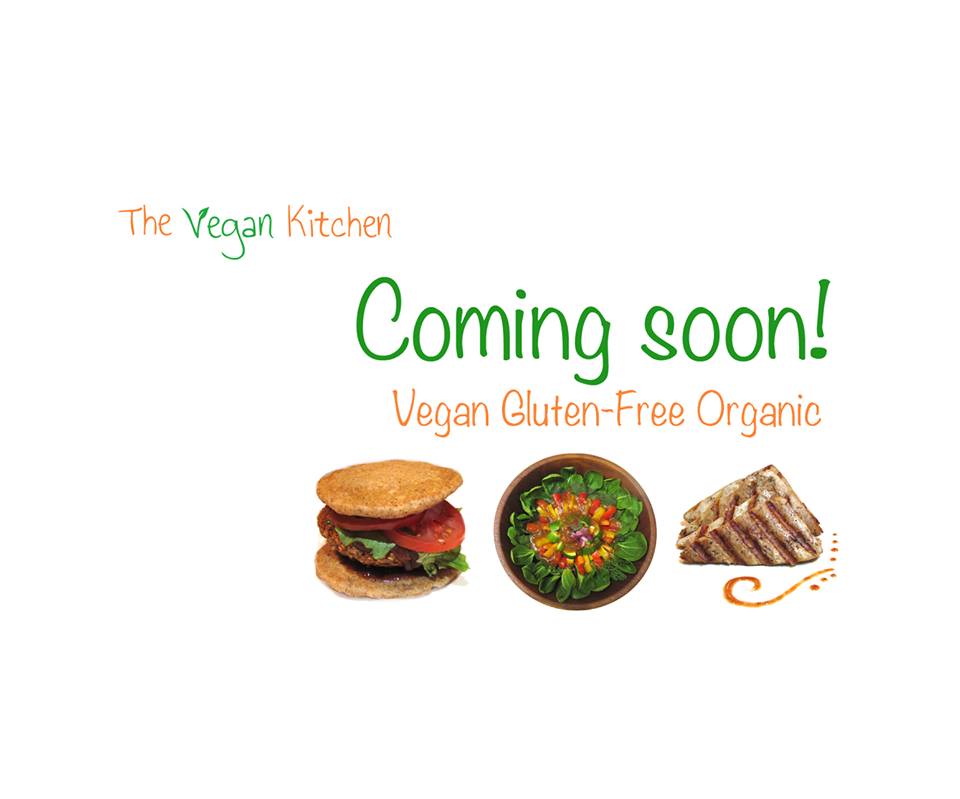 In a country which celebrates its main holidays by slaughtering sheep, eating sheep, giving out sheep and generally talking about sheep, it's always a relief to find more animal-friendly institutions cropping up like a small weed blossoming in a field of umm... dead sheep.

Alaa Sharshar and Yasmine Nazmy are vegans which, in case you thought it was just a word for extreme hippies, means people who practice abstinence from the use of any animal products, mainly in their diet. For herbivores that live in Cairo, it can be quite the chore finding both filling and tasty alternatives to meat. Thanfully, like two vegetable vigilantes, Sharhar and Nazmy will soon be opening up the city's first ever restaurant that caters to vegans, The Vegan Kitchen. We spoke to the two extreme hippies to find out more...

When and why did you both become vegans?

Over the years, we have both contemplated whether or not we should be consuming animal products, and have had several brushes with vegetarianism. Four months ago, we finally took the decision to stop being slaves to the norms we had been taught/adapted to growing up, and decided to follow the diet that feels best for us, both physically and mentally. When first hearing we're vegan, most people assume we made the choice purely for animal rights purposes. Whilst animal rights play a big role in why we are vegan it is not the sole purpose. The health benefits that can be achieved by being a vegan are phenomenal. Increased energy levels, deeper and better sleep (without the difficulty of getting up in the morning), better blood flow, reduced risk of cancer, diabetes, and heart disease, which all have been linked to high consumption of animal proteins (refer to The China Study for more details, if you're interested), and not to mention the loss of excess and unneeded fats in the body, and many, many more.

Coming back to the point of animal rights, we just don't see how we can love one species of animal (such as dogs) and eat another. When we see a cow we think "CUUTTEEE," how hypocritical would it be to be eating it later that day? The feeling is synonymous with all other living beings, even if they aren't physically beautiful. A life is a life. Veganism has also been linked to substantial environmental improvements as well as  mass reductions in world hunger. Cows are very big producers of green house gasses, and as the population of cattle increases to meet the demand of consumerism, so do the green houses gasses that contribute to air pollution. Also, one of the biggest reasons for mass scale deforestation is to make space for cattle farming, or for the farming of grains used to feed cattle. The quantities of grain produced for cattle feeding every year could end world hunger!

We have to admit, at first it was a little hard turning vegan. I'd (Alaa) miss some of the foods we had grown to love, such as cheese, but I'm glad we sucked it up and stuck with veganism, we feel better than we ever have before! Yasmine took it a step further, and has become a certified vegan nutrition consultant. She has taught me a very important lesson; vegan doesn't mean healthy, it is just one step closer to optimum health. Having a balanced diet, and eating the right quantities of the right foods, and avoiding the wrong foods, is very important! We can live healthier off a balanced plant based diet! Who would have thought! We grew up believing otherwise...

When and how did the idea to start The Vegan Kitchen come about?

When we first turned vegan we were excited (and still are) to try new recipes, and explore all the new possibilities. After spending a lot of time in the kitchen daily, trying new recipes, we started getting excited about sharing these recipes with family and friends. We wanted everyone to see how great the food tastes, as well as how great it made us feel! After several succesful vegan dinner parties with friends and family, we decided we wanted to take it to the next level, and make our food and way of life available to a wider range of people. So naturally, we started researching, planning, cooking, trying recipes, editing recipes, fine tuning, preparing to bring what we had to offer to the table. The idea just kept developing from there, and here we are today, sharing our beliefs and love with Cairo.

When are you planning on opening?

We are currently preparing our venue in Maadi, and plan to open officially within one month.

Do you know roughly how many vegans are in Egypt?

Unfortunately there are no studies indicating the vegan population in Egypt. When we turned vegan, we started a Facebook page, Egyptian Vegans, in an attempt to gather as many people as possible from the vegan community in Egypt in one page. We share health advice, recipes, and ideas on this page, and we are hoping that as awareness grows, so will our followers and supporters.

Do you think The Vegan Kitchen's menu will appeal to meat-eaters?

Fruits, vegetables, grains, and seeds are for everyone, and therefore our menu is designed to please everyone. We have compiled a creative menu that is filling, delicious, and can be enjoyed by all, not just vegans. We are recreating many non-vegan favorites in vegan form (vegan pizza, vegan shawerma, vegan lasagana, vegan burgers, etc.), as well as including many new and innovative original vegan dishes. We believe that the acceptance of diveristy is very important. We encourage meat-eaters to come and enjoy what The Vegan Kitchen has to offer, no strings attached. Our goal isn't to turn people vegan, or to say that what others are doing is wrong. We want to lead by example, but also keeping in mind that everyone is free to make their own choices.

Where do you source your ingredients from?

In the past few years there has been a revolution behind the revolution. People are becoming aware of their health, aware of GMO and the chemicals in their food. During this period, we have seen the creation of many farms that provide high quality organic produce; Jana, Makar, and Bioland just to name a few. In combination with some of the older established farms such as Sekam, we will be sourcing all of our produce from local businesses with the exception of a few select items that cannot be found locally... yet! Where possible, we will be sourcing only organic produce, but filling in the gaps with the healthiest and most natural alternatives. We are not using ANYTHING that is refined or processed! Vegan, organic, gluten-free!

Tell us about the eco-friendliness of the restaurant itself...

Our venue was previously a garage that sold cars. We are currently earthing it up! The restaurant will have living tables and living walls; plants everywhere! Our flooring is made from natural clay tiles, our walls plastered with natural plaster, our lights are LEDs to decrease energy consumption, and all of our furniture made from recycled pallet wood. Veganism isn't just a cuisine to us, it's a sustainable and minimal impact way of life. We will have no organic waste as we will be composting for our herb and vegetable garden, and we will be recycling our remaining waste, which is being kept to the minimum as we will be sourcing our products with as minimal packaging as possible, or at least reusable packaging!

Where do you think veganism fits in with religions like Christianity and Islam?

As I mentioned before, the Coptic community in Egypt is fasting for over 200 days of the year, and their fast is mostly vegan. The options currently available for fasting Copts are minimal, and not very appealing, for example cheeseless pizzas! Our pizza option uses a vegan cheese recipe that is 100% vegan and natural, making it a far more complete dish that can be enjoyed. We believe that The Vegan Kitchen will provide the Coptic community with the ability to go to a restaurant during fast and not have to worry about what they can or can't eat.

The Prophet Mohammed experienced periods of veganism through out his life. He would not consume any animal products for over a month, and would live off things such as dates, and fava beans. One of our present day problems is over-consumption. It wasn't always the norm to consume animal products daily.

What do your families think about your veganism and the kitchen?

When we first told our families we were turning vegan we were greeted with excitement and curiosity from some, and with concern from others. The concern was mainly due to lack of information, and once we provided them with the same science that led us to believe being vegan is healthy, they lay their concerns aside. We even found that a few family members and friends wanted to try out being vegan too, so we helped them find the right balance like we did, and they're currently trying it out! We're getting really good feedback from them, and some have already told us there's no going back and that they feel great. It's very rewarding and inspiring to feel like we have impacted someones life positively. In regards to the kitchen, we have their full support, and they are excited to try out more of our dishes soon!

Do you have any specialties on the menu?

Technically, our restaurant is a specialty restaurant as we are targetting a niche market, but our menu will have many specialty original items that we have created, as well as some international vegan favorites.

If you were forced to eat one more animal before you became a vegan, which animal would it be?

Well if we are being forced we probably wouldn't have the choice! But if we did have a choice, we'd choose not to eat at all rather than to eat an animal again.

The Vegan Kitchen will be located at 10, Street 256, Maadi. Check out their fanpage here.