10 of the Strangest Apartments You Can Rent in Cairo

In case you are looking for somewhere to live and enjoy outdated furniture, gaudy motifs, and paint selected by the colour-blind, we've rounded up some of the scariest properties on the market. 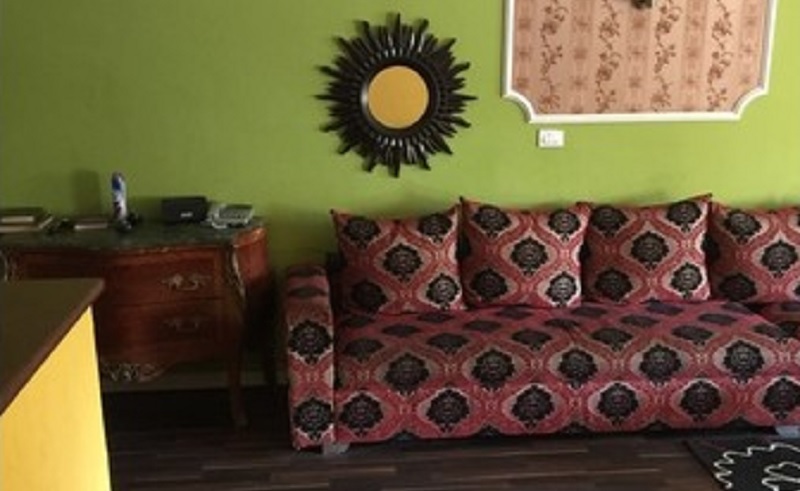 Egypt is famous for many things - the pyramids, for instance, or the Red Sea. Interior design, however, is not one of them. Though the country has produced the odd stellar designer – Ramzi Makram-Ebeid’s new co-working space in Gouna, for example, is a delight –, when it comes to your everyday, run-of-the-mill city home, the décor often leaves much to be desired. A novice house-hunter may approach the task of locating the perfect abode with unrivalled enthusiasm, but more often than not she will find herself confused and exasperated having been assaulted time and time again with flamboyant patterns and colour clashes that would leave anyone worrying for the designer's ocular health. But for those of you who are excited by the prospect of living in a Kafkaesque nightmare of startling hues, eccentric embellishments, and a healthy dose of gold, we've rounded up the most offensively decorated homes currently on the market in Cairo.

This studio in New Cairo is on the market for EGP 5,000 per month, and though the furniture would have been considered trendier forty-odd years ago, there is nothing outwardly compromising about this apartment - except for the curtains. Indeed, curtains appear to be the first major challenge for Egyptian interior designers, and the mind boggles as to what made this one choose shiny gold curtains for a room that otherwise presents no severe colour difficulties. Perhaps the designer was a fan of tin foil. 8 How Granny Got Her Groove Back

This one made the cut for a couple of reasons. Though the living room may not be particularly shocking, there is something unusual about a three bedroom apartment that requires at least 14 chairs in the same room. The amalgamation of different patterns and over-decorated, outdated furniture in various shades of beige and brown bring to mind the tastes of the elderly, but it is really the bedroom which prompts further examination with its non-sensical furniture arrangement. Aside from placing together patterns which were never meant to be seen side-by-side (and of course, some interesting curtains in a totally different design), with a living area so large, we are at a loss as to why the owner would also decide to create a living room in their bedroom, especially considering the room already lacks the space for the bedside tables to face the right direction. This Maadi abode could be yours for EGP 9000 per month. The living room of this New Cairo apartment is somewhat depressing, but it is the alarming pink bedrooms which earned this EGP 9000 per month flat a spot on the list. Perfectly positioned to block out the sun, the mirrored headboard is somewhat concerning, but it is the fiercesome-looking plastic flowers and the ghastly shades of salmon permeating these rooms that really put us off. 6 Problematic to Say the Least

An attractively proportioned room that has been assaulted by primary colours, with patterns and furniture which resemble a 1980s vision of the future. This made the list for the sheer wasted potential. EGP 20,000 will allow you to live in this 3 bedroom Maadi home; clearly money cannot buy taste. 5 From Russia with Love

At number five is this Heliopolis residence. It is hard to understand the rationale behind merging plush pink sofas with vibrant rose gold patterns, elaborate burgundy chairs, and extravagant embroidery with a black and white chequered marble wall. But combine this with an ultra modern lit ceiling and it creates the feeling of being trapped in a peculiar gold spaceship. You could take a ride for just EGP 9,000 per month. Looking at this room it's as if we've entered a McDonald's play area on acid. Clearly inspired by Ronald McDonald himself, this verging-on-sinister New Cairo living room could give you nightmares for EGP 8,500 per month. The feeling our second runner-up inspires is somewhat akin to the moment you jump off a fastly spinning round-a-bout. In addition to the obligatory bizarre curtains and unharmonious patterns, this New Cairo flat adds texture to the mix. The particularly sickening combination of velvet-like curtains, fluffy rugs, and a column held in place by a giant piece of polystyrene sits uneasily against cold tiles and the overly-polished, rounded-to-excess kitchen units. From the cubic patterned glass in the wall cupboards to the metal light fixture, nothing in this flat matches - and it could all be yours for EGP 8,000 per month. 2 One Step Forward, Two Steps Back

Colour, when used correctly, can really make a home. Unfortunately for this New Cairo apartment, the designer's colour scheme is less attractive, more Alice in Wonderland-gone-wrong. The use of luminous green throughout the home - including the bedroom furniture - seems specifically designed to prevent any form of sleep or relaxation, and combined with electric shades of yellow and red, provides a shocking sensory experience. Many say, however, that the key is in the detail, but in this case, the details are similarly horrific. The once-decorative, now (obviously) gold, flowers lining the ceiling appear to be replicated in a bizarre wallpapered panel - presumably designed to imitate a picture frame - which hangs over a particularly distasteful sofa. For EGP 6,000 per month, you could live in this vibrant Madinaty apartment. With 3 bedrooms and 1 bathroom, it is well-equipped for families. Unfortunately, the flat is totally devoid of any running theme and showcases everything we dislike about Egyptian interior design. The living room possesses particularly frightening curtains - used somewhat to excess - set next to an amalgamation of wallpapers sporting stripes of varying widths and peculiarly-shaped flowers - or are they bats?

Moving on, things don't get much better in what we can only assume to be the children's bedroom. Similar eye-watering greens can be found, except this time masquerading as friendly kids' designs. Add to this some rather unpleasant shades of yellow, it seems unlikely that the kids will get to sleep any time soon.

The kitchen is probably the least offensive part of the flat, though we are concerned about the two-toned wood units against the miserable swamp-like colours. We are also puzzled by what appears to be a line of chocolate bordering the entrance.

Finally, we have the bathroom. Almost normal, the slightly-too-off-pink tiles are easier on the eyes against regular white ones, and the flowers, this time, look like flowers. The problem, however, lies in the far right corner. Not only does the shiny wood unit sit uneasily against the sleek modern sink, but beyond this lies a wall in a shade of brown that is perhaps an unwise choice for the bathroom.